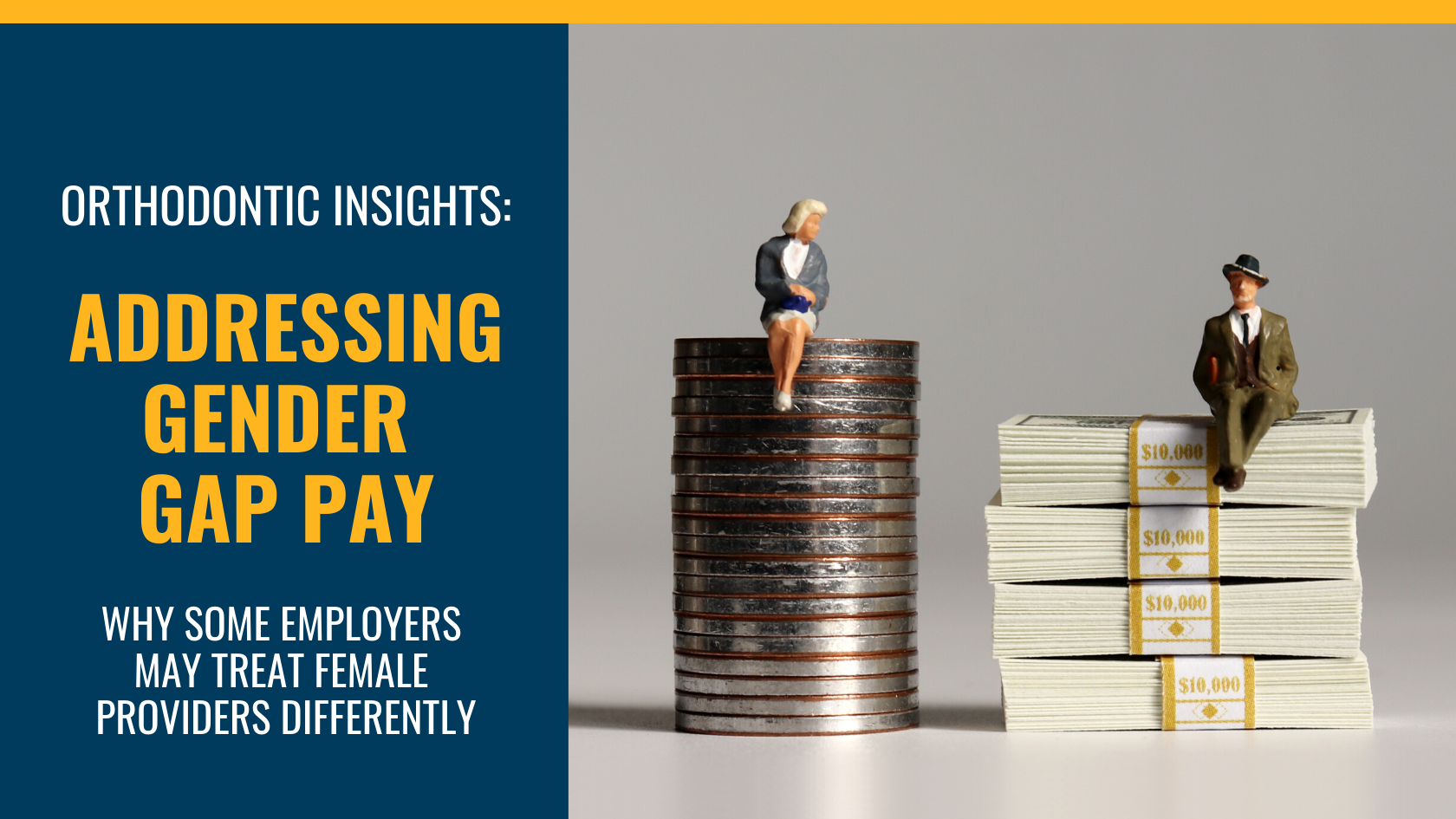 During the past few decades, there has been a significant increase in the number of women entering dentistry. While pediatric dentists continue to lead the charge with a whopping 52% of providers being female, the orthodontic industry is also making headway with females representing 31% of the workforce. According to the 2019-2020 Survey of Advanced Dental Education, females represent 69% of all pediatric dental residents and 52% of all orthodontic residents. And for the first time in history, more females (195) than males (193) graduated from orthodontic residency in the United States in 2019-2020.

While we continue to expect the percentage of female providers in these specialties will increase in years to come, what effect has the growth had on gender gap earnings? The answer may surprise you.

According to a 2017 study from the ADA Health Policy Institute, male dental providers earned as much as 54% more than women in 2010. Even after controlling for observable characteristics including age and hours worked, the difference would still be 36%, or what the study’s authors call the “unexplained difference.” The study also looked at wages in medicine and law over a 20-year period. It found that despite accounting for observable characteristics there continues to remain a large, unaccountable earnings differences between men and women among all three of these professions.

Why would there be a gap in earnings between male and female dental providers with similar hours worked, experience, specialty, and practice ownership status? Would a potential employer compensate a female less for the exact same work schedule as her male counterpart? Let me put it this way, would a female provider enter into an associateship or partnership arrangement with less favorable terms than a male counterpart willingly? The answer to these questions may very well be yes.

Studies show that female providers often accept lower compensation packages than their male counterparts, especially in their first job post-residency. Let’s look at some historical data. According to the ADA study, historically, male providers tended to be self-employed (80% compared to 45%) and worked about four hours more per week than their female counterparts did. However, the study also found that by 2010, men and women worked the same number of hours a week and the number of female owners was up to 50 percent while male owners had fallen to 73 percent. If that is indeed the case, why does the wage gap still exist?

The ADA commentary article also referenced the book “Lean In: Women, Work, and the Will to Lead” by Sheryl Sandberg, chief operating officer at Facebook, who writes how women approach work differently than men, particularly when it comes to salary negotiation. The reality is that female providers may simply be less aggressive during contract negotiations and just accept an offer given to them. Women may simply define success differently and money may not be their driving force.

However, there is actual evidence of a wage penalty for motherhood in the workforce. With all else being equal, there is a negative relationship between a woman’s wage and the number of children she has. According to OECO (Organization for Economic Co-operation and Development) data, the penalties averages to about a 7% wage reduction per child. On the flip side there is also evidence of a fatherhood premium; a positive relationship between a man’s wage and the number of children he has. However, when you compare men and women with the same educations, working full-time in the same capacity the gender gap in earnings has largely disappeared. It is often several years after accepting a position and the arrival of children that the gender gap in earnings shows up. If a woman chooses to move to part-time employment in order to spend more time at home it is when she returns to work full-time that she may accept a lower wage compared to the wage she would have earned had she stayed on full-time. It is important to note that if you work less hours you may have less experience and therefore you will possibly see a wage difference.

It is important to remember that, if a female provider works less than her male counterparts, it is reasonable to be paid less. However, if you find that you work the same number of days and hours and you still make less you might consider asking for a higher compensation rate. Remind your employer that you took on just as much student debt as your male counterpart therefore you have the same financial needs.

1. Remember you are always your best advocate. If you don’t stand up for yourself, no one will! Remind your employer that you received the same education, work the same schedule and you should receive the same pay.

2. Don’t be afraid to negotiate for a higher salary before accepting a position.

3. If you have an income guarantee or daily rate gently remind your employer that it should be the same for candidates who have the same experience and work the same schedule. However, if you receive a production incentive it will be up to you produce and meet the pre-determined goals the employer/practice has set.

4. If you are in a group practice be sure that you are seeing as many new patients as your male counterparts so that you can meet your production goals. Understand who and how the new patient exams are scheduled.

5. Know your worth! If you are active in the community and close to referring doctors be sure your employer understands the goodwill and referrals you bring to the practice.

Also, be sure to study up or even consider contacting a career coach on how you can develop and understand negotiation techniques advocating for better pay. Understanding the gender gap in pay has never been more important because the tides are shifting ladies.