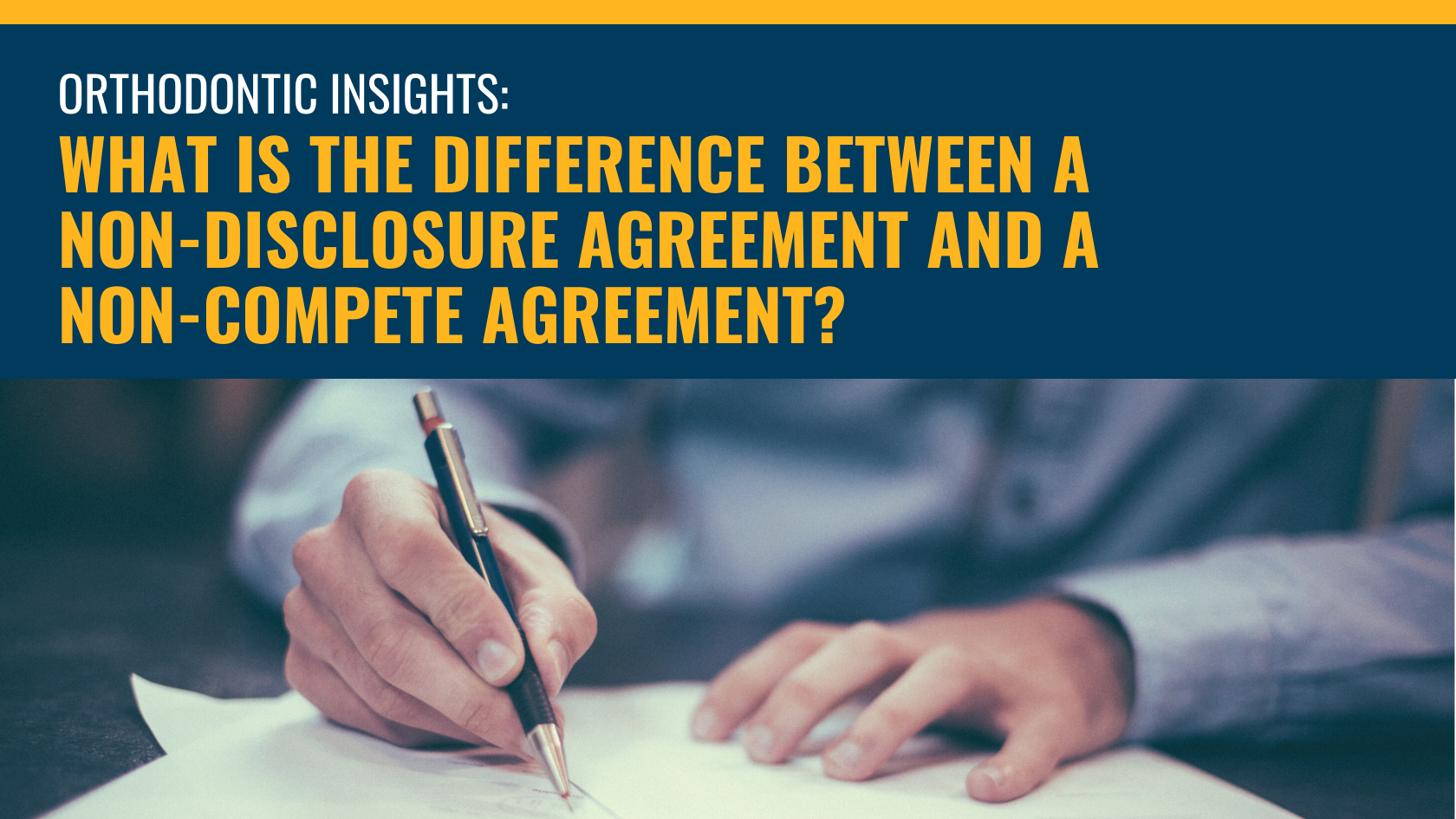 As a recruiter, I often hear the question “What is the difference between a non-disclosure and non-compete?” from candidates who are seeking employment opportunities. It is important to understand the differences and what they mean for you as a candidate.

A non-disclosure agreement is a promise that you will not disclose any of the information shared with you about a potential practice opportunity. Often it will include practice and/or doctor name, location, patient information, expansion plans or any financial information about the practice. It does not mean you can’t work for a competitor; it simply means you can’t use proprietary or confidential information you learned or obtained from the practice with another practice. You will often be asked to sign this agreement by a client or representative of a client before they discuss the specifics about their practice opportunity. Importantly, non-disclosure agreements almost universally allow you to share confidential information with your attorney or other advisors in the buying process.

A non-competition (restrictive covenant) agreement means you agree not to directly compete or provide services within a certain proximity of the practice for a set period of time. The purpose of a non-compete is to protect the former practice employer against unfair competition. As a provider, you will have access to confidential business information and develop close relationships with patients and staff and could exploit the information to lure patients away from the practice. A non-compete is designed to protect the practice from this risk.

What geographic area does a non-compete cover? A non-compete covenant should only prohibit a provider from continuing to provide services in the same general area where he or she provided services before disengaging with a previous practice. In most states, the restricted area should be no larger than the area from which the previous practice draws 80% of its patients. Therefore, a reasonable radius for a non-compete will depend heavily on the population density of a particular area – generally, a larger radius is enforceable in rural areas. The opposite is true in more urban areas.

How long do non-competes typically last? The time periods can vary, but generally, the covenants are in effect during the employment period and for a period of 12 to 24 months following the last day services are provided to the practice.

Non-competes and non-disclosure agreements are two important documents to understand each having a distinct but separate purpose. 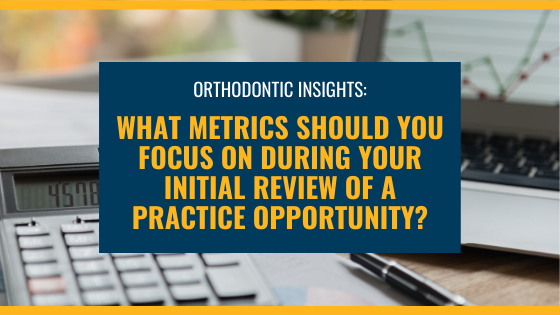 Reviewing an opportunity to purchase a practice outright or to buy into a practice as a partner can be an overwhelming task. You may have been presented with a mountain of data about the subject practice: tax returns, profit and loss statements, and operational reports. What does it all mean? What should you focus on? What data is important in determining a fair value for the practice?

Well…the long answer is that all of the data and information surrounding a practice is important in determining its value. After all, an orthodontic practice is a unique asset and no two are exactly alike. However, there are a few things you can focus on that will provide a reasonable snapshot of any practice. Three of the most consequential are explained further below:

As I said above, there are dozens of factors that go into determining the value of a practice. No one point of data will tell you everything you need to know about a practice. However, analysis of the three metrics above should give you a pretty solid idea of the type of practice you are looking at and whether it is worth pursuing further.

Every orthodontic practice is different so potential patients and their pa
rents will be looking for what looks like the “complete” package. Putting yourself in their shoes, let’s see what that looks like.

Parents want an office environment where their kids feel comfortable. Not only with their surroundings but with the doctor(s) and team members. The first impression of your office is usually a ‘make it or break it’ moment. As soon as parents walk in the door, they are looking around to see if the waiting room is clean and inviting. They will then make a mental note if their interaction with the front desk is a pleasant experience. Your team needs to be aware of how important that first touch truly is to a parent!

Every parent is paying attention to the treatment fees. Several parents might even get second or third opinions. However, that is not always the deciding factor. Parents also value the quality of orthodontic care their children will receive. If they have been referred to an orthodontist by their child’s dentist and other parents that rave about the quality of your practice, price can become a secondary consideration. Let’s face it, word of mouth referrals are a key to a thriving orthodontic practice.

Patients also like to feel like they are the only one in the room while they are being cared for so paying attention to them is of utmost importance. Your team members should carry on conversations with patients and make them feel important during their time in the clinic. Parents like to see that their kids are being treated with individual attention as well. Therefore, when it comes to the new patient appointment, it is crucial to exemplify these qualities so that the parent and patient will choose your practice for their orthodontic care.

Having a “patient-first” approach is certainly what every parent or patient likes to see!

Well…over cocktails at a holiday party in 2010, Michael Dubin, then 34 years old, found himself next to the father of one of his friends’ fiancée in a discussion that somehow meandered into complaining about what a rip-off $4.00 and up razors were and was there a better way. A year later, with Michael Dubin as pitchman and his now partner Mark Levine in operations, the two launched Dollar Shave Club (dollarshaveclub.com); selling razors on the internet for $1.00 plus $2.00 shipping and handling. Hardly a threat to the formidable Gillette brand that had recently launched the three blade Mach3 after spending $750 million in research and development on the product.

Dubin invested his life savings, about $35,000, to build a website that was launched in July of 2011. Working tirelessly, the early going was slow. He spent six months driving around trying to connect with media to spread the word and signed up the first 1,000 members without spending any other money. Then came the idea to create a goofy video to promote the brand and product at a cost of around $4,000, which launched in early 2012. The slightly irreverent video went viral – extolling convenience, price and featuring two cheeky slogans: “Shave Time. Shave Money.” and “Our Blades are F***ing Great.” In the two weeks following the initial YouTube post, over 12,000 new orders flowed in, and that was after the website crashed due to volume in the first hour and was down for twelve hours.

The rest is history. Dollar Shave Club gained subscribers, or as they like to call it “members,” for its razors with blades imported from Korean manufacturer Dorco. In 2015 sales surpassed $150 million and 2016 sales are on pace to surpass $200 million in razors costing about a quarter to buy and package and selling for a dollar. The punch line is this – two weeks ago Dollar Shave Club was purchased for over five times sales for one billion in cash by Unilever, Proctor & Gamble’s largest competitor.

Yes, David can take on Goliath in today’s business world. What are some takeaways from the story?

1. There are new ways to sell old products – Dollar Shave Club went to the consumer.

2. A form of guerrilla marketing is available today that can neutralize the advantages of older established brands. Dollar Shave Club content is hosted on Amazon Web Services (launched in 2006), YouTube (launched in 2007) made it easy and inexpensive to view their video, and Facebook (launched in 2004) made it possible to share the video to millions for free.

3. The established market leader could not change its model to compete. Proctor & Gamble simply wasn’t structured to drop their price on the Gillette razor line to compete with the new competitive threat. Their built-in overhead and delivery model ended up costing Gillette an 11% drop in market share to 59% of the razor market, down from a commanding 70% share in 2006.

4. Gillette essentially over-engineered the razor market. It turns out that two blades were enough to satisfy customers. After the launch of the three blade Mach3 came the five-blade Fusion from Gillette; which had a 40% premium to the Mach 3, but was met with slower than expected sales. No worries for Gillette, customers still purchased the Mach3, but the concept of more blades for more money was challenged.

Food for thought from a modern day David and Goliath business tale.

As valuation and transition consultants, we have the duty to analyze a practice for sale or purchase with great scrutiny. When performing a practice valuation study, we analyze the last three years of a practice’s financial performance and operational performance for each practice. This provides us not only the revenue and expenses, but the patient flow, the conversion ratios from new patient exams to starts, the fee structure, the marketing plan, etc. More importantly, when visiting each practice, we observe the physical facility, fixed assets in service, staff, location within the practice’s drawing area, competitors’ location(s), and so on. We also perform a detailed demographic analysis of the patient drawing area. Needless to say, we end up with a great deal of data on each practice; having the opportunity to see practices in every geographic region of the country.

There are many contributing reasons as to why a practice cannot grow: competitive environment, demographic environment, geographic limitations, and so on; however, our observation of the number one reason practices cannot grow is because they do not currently operate with efficient systems. Systems are perhaps the key foundation to growth and without them, a practice in chaos will experience greater chaos as it makes decisions and tries to grow, ultimately imploding under the weight of poor systems. Some examples are:

• If patients are not seated on time, adding growth to a practice will only exacerbate the problem.

• If cases are not finishing on time, growth presents real problems as chairs fill up with unhappy zero contract balance patients.

• If the staff is turning over at an accelerated rate, and there is gossip, backstabbing, and an ununified team that is just getting by, growth is not in a practice’s future.

• If there is poor direction and leadership from the owner, counting on the staff to pick up the leadership role and grow the practice is likely not going to occur.